During the month of March, EIA published its Short-Term Energy Outlook (STEO) with price projections for the next two years:

From the prior month’s STEO, these prices represent significant downward revisions of $4 per barrel in 2016 and $10 per barrel in 2017.  Furthermore, this forecast reflects the notion that prices are not likely to quickly rebound to pre-2015 levels. One of the key reasons that prices are expected to remain low over the next two years is that the world is currently awash in oil. In the U.S. alone, crude inventories totaled 529.9 million barrels for the week ending April 1, 2016 –“historically high levels for this time of year” and constituting an 11.9 million barrel increase from the end of February. In fact, during the month of March, crude stockpiles in the U.S. momentarily reached their highest levels in more than 80 years (534.8 million barrels).

While inventories in the U.S. are rising, the rig count is still on a downward trajectory: for the week ending Friday April 1st, the Baker Hughes total U.S. rig count fell to 450 rigs—this is the lowest level since the rig counting service began in 1944 and represents a decline of 14 rigs from the week prior.

Certainly, this sharp decline in oil prices has significantly affected the Canadian energy sector, particularly in Alberta where there is a lack of major pipeline infrastructure to transport inland crude to new markets.  Last year, TransCanada’s 830,000 bpd Keystone XL Pipeline was rejected by the Obama administration.  Additionally, Kinder Morgan’s Trans Mountain expansion project (from 300,000 to 890,000 bpd), Enbridge’s 525,000 bpd Northern Gateway, and TransCanada’s 1.1 million bpd Energy East continue to lag in various forms of regulatory hold-up.  In an interview this past month, Canadian Resources Minister Jim Carr said that the construction of pipelines to ship crude oil to new markets is “important to Canada’s energy future.”  Complicating this infrastructure matter further is a newly elected liberal government in Canada which has promised to change the way pipeline projects are reviewed and pledged to cut carbon emissions by 40-45% by 2025, in comparison with 2012 levels. All told, these developments leave a high degree of uncertainty hanging over these major projects. According to our WCSB balance, additional exit capacity could be needed as soon as late 2017 depending on the degree to which existing rail loading capacity can be effectively utilized. Put another way, the potential delays in the pipeline projects presage a return to large discounts for Western Canadian crudes after a period of at least some degree of relief. 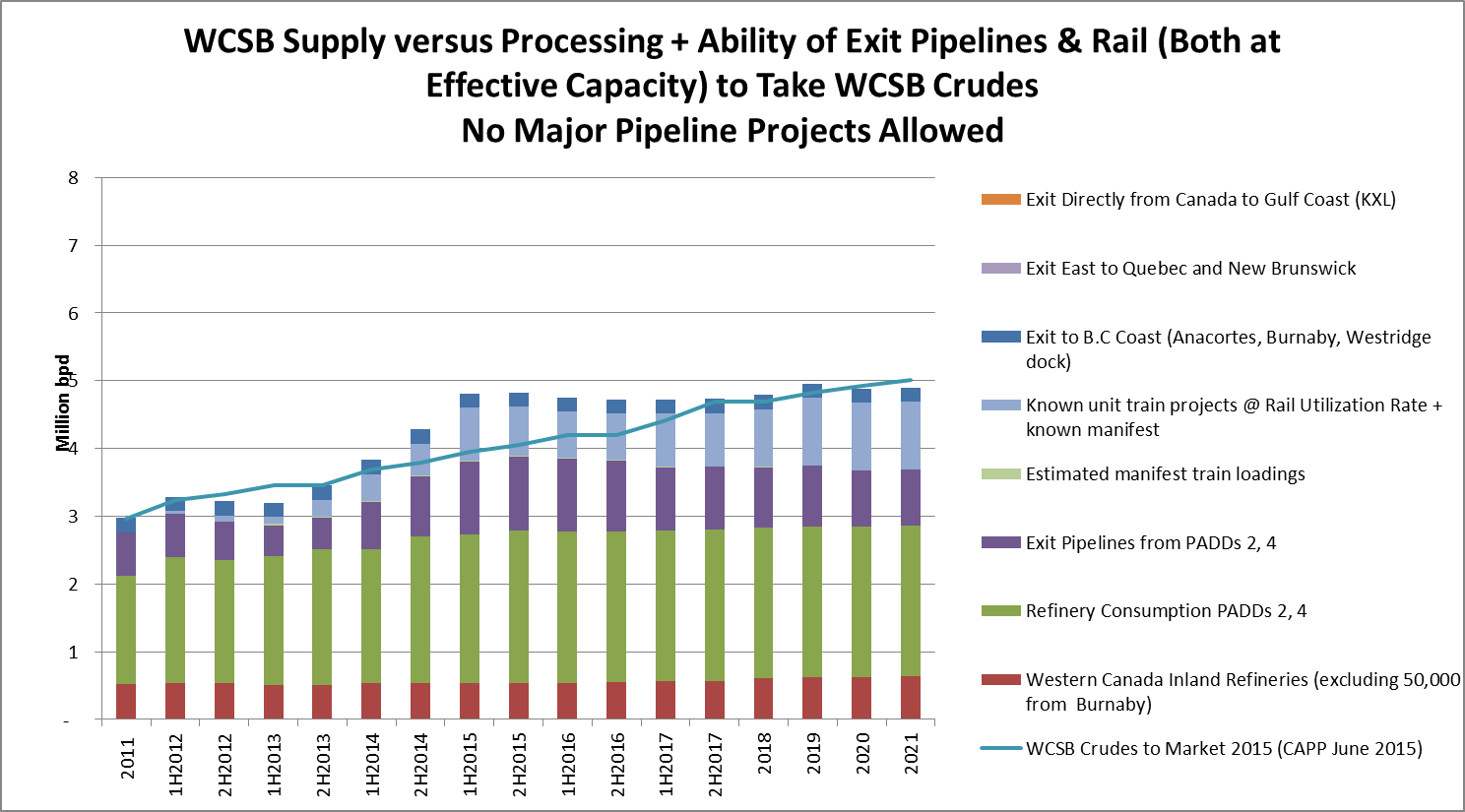 In the United States, the three-member Iowa Utilities Board (IUB) panel voted unanimously to conditionally approve Dakota Access Pipeline’s 450,000 bpd Bakken Pipeline which will run from the Bakken to Patoka, Illinois with onward connection to Nederland TX via the Energy Transfer Partners’ Trunkline Pipeline. The outstanding conditions that Dakota Access must comply with involve involuntary easements, land mitigation, and parent company guarantees.  The pipeline is expected to enter service in 4Q-2016.

In March, the Wisconsin Department of Natural Resources (DNR) held public hearings to discuss the proposed Sandpiper and Line 3 Replacement projects.  Additionally, the Minnesota Public Utility Commission (PUC) declined to speed up the review process for the projects. Enbridge had previously asserted that the state’s process has unreasonably delayed the projects.  If the projects receive the necessary permitting and move forward, Enbridge’s Sandpiper and Line 3 Replacement are expected to enter service in 2019.

Kinder Morgan has stopped work on the proposed 360-mile leg of the Palmetto Pipeline project due to issues of eminent domain in Georgia.  The project would carry 150,000 bpd (ultimate capacity of up to 167,000 bpd) of products (gasoline, diesel, jet, and ethanol) from Belton, South Carolina through Georgia to Jacksonville, Florida.

While still technically open for business, the Portland, Maine (USA) to Montreal, Quebec (Canada) has this year ceased to transport oil due to the changing dynamics of the crude market.  The pipeline’s future, it seems, hinges on whether the company is allowed to reverse the line (thus becoming the Montreal-to-Portland Pipeline) in order to export Canadian oil sands.

Artemis Liquids is holding an open season for its rail and terminal project—dubbed NJ Market ConX—to move 50,000 to 75,000 bpd of refined or fractionated liquid petroleum gases from Marcellus/Utica fractionators to its New Jersey terminal.  Artemis explains that, “Currently, marginal US LPG production is being sent to Mt. Belvieu for export” and “railing a short distance to the East Coast will offer producers a cheaper option resulting in higher netbacks while allowing them the ability to sell into domestic markets during peak season.” The NJ Market ConX open season ended on April 7, 2016 and, pending a successful open season and timely regulatory approval, the new terminal is expected to enter service in 1H-2018.

Amid continued interest in finding ways to get Canadian oil sands to global markets, a rail company—G Seven Generations Ltd—is undertaking a feasibility study this spring to assess moving crude-by-rail from Fort McMurray, Alberta to the city of Delta Junction, Alaska.  From there, it would be injected to the trans-Alaska Pipeline for transportation to Valdez, Alaska and, eventually, reach Asian markets via oil tanker. According to the CEO Matt Vickers, this (speculative) project could be shipping one million bpd by 2020 assuming a two-year regulatory review process. This project recently received new life after the Alberta government provided $2 million of funding for the feasibility study.  The study also highlights the continued efforts to transport substantial volumes of Canadian oil sands to international markets through the development of a major infrastructure project.