The EIA also published its October Short Term Energy Outlook (STEO) price projections for the next two years. October’s STEO showed little difference from that found in the September STEO.

For the first time since May 2014, Bakken production fell under 1 million barrels per day according to the North Dakota Department of Mineral Resources, due in large part to continued depressed prices for crude. The decrease in production, coupled with difficult regulatory approval processes, has resulted in a slowdown of logistics developments in the region, perhaps best illustrated by the recent indefinite delay on the Sandpiper Pipeline project. (The Dakota Access Pipeline project has been experiencing widely publicized problems).

Bakken crude (PADD 2 production) finds its way to market through a combination of pipelines and crude-by-rail. In 2015, outbound pipelines from the Bakken region had the capacity to handle over 58% of the total production. Furthermore, in 2015, over 50% of crude leaving PADD 2 moved by pipeline to the Gulf Coast. These pipelines include the Butte/Platte system and the Enbridge Mainline North Dakota and Bakken Expansion Pipelines. Despite the delay on Sandpiper, other pipeline projects could add significantly to Bakken takeaway capacity in the next few years. The Dakota Access Pipeline (under construction) would add 470,000 bpd and TransCanada Upland Pipeline (permitting stage) would add 300,000 bpd. These projects should provide a higher level of assurance that the steep “Bakken Discount”—in which Bakken sold for a discount up to $12 per barrel as compared to similar oils—is a thing of the past. The Dakota Access Pipeline offers to reduce transportation costs by as much as $6 per barrel by displacing higher-cost crude-by-rail (CBR).[1]

Crude-by-rail —heavily utilized from 2008 to 2015 as Bakken production rose significantly—will continue to fill the gap between regional production and pipeline takeaway capacity. But as both production has fallen and pipeline capacity has risen (to a lesser degree) since 2014, the demand for rail has declined. This effect is clearly visible in the Logistics Database Bakken Balance chart above and in the change in total movements from the Bakken (PADD 2) to the East Coast (PADD1).  This has represented a primary CBR market for Bakken crude due to the absence of pipelines flowing into the region and to discounts that existed on Bakken crude relative to similar-quality international grades.

In July 2015, crude movements from PADD 2 to PADD 1 by rail totaled 340,000 bpd.  This movement has proved vulnerable as the broader build-out in US crude oil logistics has essentially eliminated domestic US crude price discounts to international grades and as the crude oil price drop has cut Bakken production and left CRB relatively more expensive. By July 2016, total CBR shipments from PADD II to PADD I had fallen by over 50%.  During this same time, PADD I refineries increased foreign crude imports from 713,000 bpd to 931,000 bpd as US and foreign crude oil markets equilibrated. 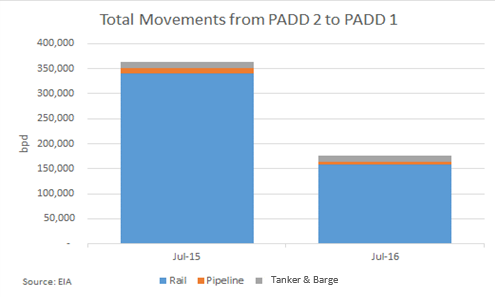 The reduction in Bakken production has also affected other crude-by-rail movements out of the region (namely those to PADDs 3 and 5). Investments in CBR going forward also appear to be more conservative: in October 2016, Shell decided to scrap its plans for a crude-by-rail terminal at its Puget Sound refinery in Anacortes, WA. According to the refinery’s general manager, “at today’s prices, even if I had a (rail) facility, I would not be buying Bakken.”  It is difficult to see a scenario where use of CBR to transport Bakken crude recovers except under a scenario in which there is renewed growth in Bakken production and an inability to achieve pipeline expansions.

Leaks from three pipelines and an extended maintenance shutdown in October drew attention to the importance of the U.S pipeline infrastructure. A recent article from the Wall Street Journal points out that more than 60% of U.S. oil pipelines were built before 1970. As pipelines age their reliability becomes more of an issue due to the possibility of corrosion. The disruptions from the shutdowns in October have led to questions being raised over the dependability of the U.S. pipeline infrastructure at the same time as highlighting consumers’ critical dependence on it.

The Colonial Pipeline experienced an explosion after a contractor ruptured the 1.7 million bpd Line 1 causing it to shut down. The fatal explosion is the second shutdown of Colonial’s Line 1 in the past two months. The Colonial Pipeline is a vital supplier to the U.S. east coast gasoline market. Both shutdowns caused short term disruptions to regional gasoline markets.

The 400,000 bpd Seaway Pipeline shut down for more than a week after a leak occurred on October 23. The pipeline moves crude oil from Cushing, OK to the Texas Gulf Coast.

A Sunoco Logistics gasoline pipeline in central Pennsylvania leaked because of heavy rainfall and flooding. Sunoco Logistics is taking steps to contain the 1,300-barrel leak due to proximity to a tributary of the Susquehanna River. The timetable for the pipeline returning to operation is still uncertain.

Plains All American’s Basin Pipeline was shut down for additional time after a pressure issue was discovered during a planned shutdown. The Basin Pipeline has a capacity of 450,000 bpd and is the largest pipeline leaving the Permian Basin.

Vancouver Energy—a joint venture between Savage and Tesoro—has offered a “stair-step” operational plan for its proposed 360,000 bpd Vancouver Energy terminal. The proposal calls for operating the terminal at no more than 50% of optimal throughput capacity for the first year (180,000 bpd). After 12 consecutive months of operations free of any environmental or public safety incidents, the effective throughput capacity would then increase to 75% (270,000 bpd). After a final twelve months of safe operations, the facility would be able to operate at its maximum nameplate capacity, 360,000 bpd.

Westway Terminals submitted a proposal to the Washington Department of Ecology to expand an existing Grays Harbor methanol terminal to handle crude oil. A final environmental impact statement has recently been released, which highlights some of the risks of the terminal. The proposal calls for the terminal to be able to handle up to 49,000 bpd of crude and store up to 1 million barrels.