During September, the U.S. oil and natural gas rig count increased by from 489 to 522 rigs.

September’s STEO showed little difference from that found in the August STEO. However, the EIA notes, “The current values of futures and options contracts suggest high uncertainty in the price outlook.” This is evident as the WTI spot oil price rose from $43 to $48 from September 1st to 30th.

The EIA also released its Annual Energy Outlook (AEO) 2016 in September. In the AEO2016 Reference case, U.S. crude oil production begins to rise in 2017 as both prices rise and production technology continues to advance and bring down costs. The AEO2016 forecasts that U.S. crude oil production will be 8.84 million bpd in 2016, fall to 8.55 million bpd in 2017, then finally rise to 9.01 million bpd in 2018. A recent large discovery by Apache in the Permian Basin reflects the more bullish long-term outlook for U.S. oil production. Production in the new field—referred to as “Alpine High” — will not begin until the second half of 2017 but the 3 billion barrel find will presumably have implications for Gulf Coast infrastructure going forward. 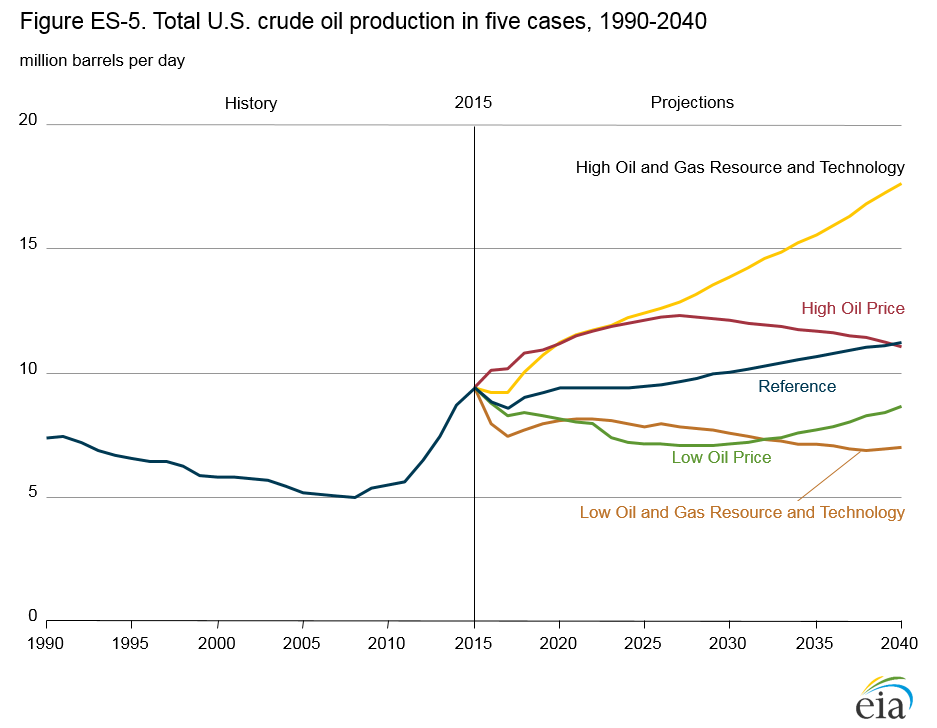 While the rise in U.S. production is not estimated to kick-off again till 2018, it is likely to bring with it renewed pressure to alter and expand the crude oil logistics system as well as related to changes to crude oil flows. Added to this, CAPP 2016 predicts that Canadian production will rise from 3.8 million bpd this year to 4.0 million bpd in 2017 and to 4.4 in 2020. This predicted rise in production has spurred projects to increase the take-away capacity from the WCSB. However, obtaining regulatory approval for such projects has proven to a major challenge (e.g. Keystone XL and Northern Gateway). On the upside, people familiar with Canadian Prime Minister Justin Trudeau’s plans say that he plans on approving at least one major Canadian oil pipeline, with the Trans Mountain expansion currently in the lead (see below).

The Dakota Access pipeline remains in the spotlight as construction has been halted near the Standing Rock Sioux reservation. The contested area is a 40-mile segment on both sides of Lake Oahe. A federal judge initially ruled on September 9 that construction could resume, but the U.S. Army Corps of Engineers, Department of Justice, and Department of Interior immediately stepped in. They requested that Energy Transfer Partners (ETP) temporarily halt construction. ETP has agreed to do so while an appeals court considers an emergency request by the Native American group claiming the project could damage sacred land. Meanwhile, construction continues on the rest of the pipeline.

A leak in the Colonial Pipeline (Line 1) highlights the pipeline’s importance to the U.S. Southeast gasoline market. On September 9th, a 6,000-barrel leak occurred on the pipeline which resulted in a shutdown for about two weeks. The Colonial Pipeline Line 1 typically transports more than 1 million bpd of gasoline from the Gulf Coast to Greensboro, North Carolina. With the pipeline down, a supply shock rippled through the Southeast and caused gasoline prices to surge more than $0.20 per gallon. In contrast, gasoline prices in Northeast states were not as significantly impacted as these areas receive products from various sources including local refineries and are thus less reliant on the whole Colonial pipeline system which runs from Houston, Texas to Linden, New Jersey.

Williams Partners’ is moving forward with a plan to invest in a natural gas pipeline that will feed LNG liquefaction terminals in Texas. Williams applied to FERC for authorization for its Gulf Connector project. Once completed in late 2018, the liquefaction terminals and export facilities will be able to receive an additional 475 MMcfd. The project will also enable natural gas to flow bi-directionally between Louisiana and South Texas on its Transco pipeline.

Another proposed crude-by-rail terminal on the West Coast, Vancouver Energy, is currently in the regulatory review phase. The project has recently received push back from local politicians and, this past month, from the Washington Assistant Attorney General Matthew Kernutt. According to the Spokesman-Review, “As counsel, Kernutt’s opinion could have a significant influence on the environmentally conscious Gov. Jay Inslee as the governor decides whether to approve the transfer terminal.” The proposed terminal would be able to eventually offload up to 360,000 bpd.

Petronas’ Pacific Northwest LNG received conditional approval from the Canadian government for the export facility near Price Rupert, BC. The facility will have the capacity to liquefy and export between 2.1-3.2 BCF/day. However, Petronas is currently reviewing the project because the Canadian government laid out 190 conditions that must be met and due to the large cost of building the facility, $27.3 billion.